By Unknown - March 21, 2007
Did you know that some engraving machines are completely computer-controlled? Like many other machines that used to be hand-operated (sewing machines and embroidery machines, for instance), engraving can now be done completely by machine with virtually no human intervention. This is great for items that are thick and solid, like the inside of a wedding band, or the plaque on a trophy--and it can produce very small text which is precisely positioned. 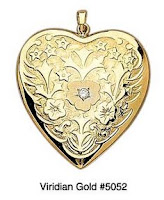 But what about a locket that is made of relatively thin gold (compared to the thickness of the ring), and usually domed, also? Even a heavy locket that has a thick shell can be deformed by the pressure of the engraving tool. That means that the potential exists to permanently dent the locket where the engraving is placed! A computer controlled engraving machine does not have the ability to give "tactile feedback" needed to properly engrave hollow and domed items--it is fine for use on a plaque or a ring. This is the reason that locket engraving requires the skills of an experienced jeweler who uses an "old-style", manually operated engraving tool. That way, the engraver can control the amount of pressure on the locket to insure that it is not damaged.
When your locket order with Viridian Gold specifies engraving, your locket is skillfully engraved by our expert jeweler, using a hand-operated engraver.