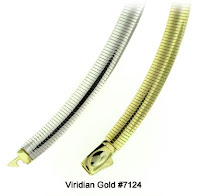 Ever wonder about the types of Omega Chain that we describe on our website? Well, here are some answers:

Omega chain comes in several types--there's reversible omega (it's cross section is a "flattened oval", white gold on one side and yellow on the other like our 6mm #7124 shown here), flexible omega (it's round and "soft", flexible like a snake chain) and "round omega" which is round also, but more stiff than flexible omega. Then there is "solid, or domed, omega", which is really a round omega that has been flattened into a crescent cross section, so that the top is domed and the back is concave. Round, domed and reversible omega chain are by design rather stiff--they form a circle when worn around the neck, rather than drooping down the chest like a pendant chain. Some domed omegas can even be "graduated", meaning they are wider at the front, and narrower at the back of the neck where the clasp is.

You can hang a pendant or slide on one of the smaller diameter omega chains, from 1 mm up to 3mm, or just wear it by itself for understated elegance. Wider omega styles are designed to stand on their own, without the addition of a pendant.
type of omega chain what is flexible omega chain